In the field of wastewater treatment, it is expected to usher in a new technology that greatly accelerates the removal of pollutants, and the cost only accounts for a small amount of existing methods. Australian scientists have extracted cheap alloys that can remove impurities from contaminated water, which may have a major impact on industries such as textile production and mining. Scientists especially hope to use next-generation water treatment technology to improve highly polluting mining and other industries. 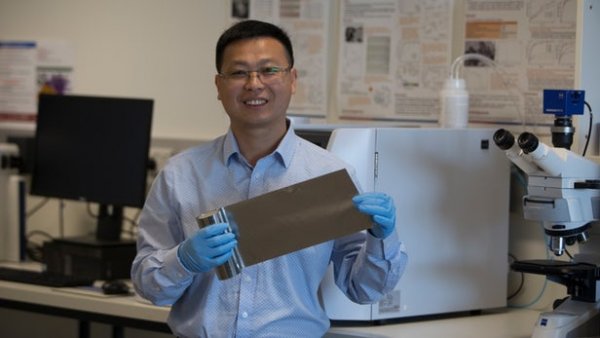 Researchers have developed a crystalline alloy that can remove impurities in wastewater in a few minutes (Photo: Edison University)

Filters made of quartz fiber, reusable microfoam, and sunlight-activated nanoparticles are all new technologies that are expected to solve this problem.

However, scientists at Edith Cowan University in Perth, the capital of Western Australia, have proposed a brand new solution that is said to purify wastewater more efficiently.

The breakthrough focused on the manufacturing methods previously used by the research team to develop metallic glasses with disordered atomic structures to remove impurities in wastewater.

This technique is suitable for the formation of so-called crystalline iron base bands, which are heated in a specific way to form a more ordered atomic structure. This allows the electrons in it to move more freely and combine with pollutants.

Lead researcher Laichang Zhang said in an interview with New Atlas: "With the help of specific treatments, metallic glass begins to become a crystalline structure, and particles are also generated inside."

Fast electronic transfer is our big expectation for its use in wastewater treatment. The new material can effectively convert pollutants into harmless substances, such as water and carbon dioxide.

In short, the faster the electron transfer rate, the higher the efficiency of removing contaminants. The team tested and found that the new material is sufficient to purify wastewater contaminated with fuel, heavy metals, and organic matter in a few minutes, and is much faster than existing methods.

The team stated that the entire process will not cause any waste, and the same material can be reused five times in the test.

It is worth mentioning that at a cost of 15 Australian dollars (10 US dollars), enough alloys can be manufactured to remove large amounts of wastewater.

The research team is currently collaborating in the industry to further reduce costs and improve the efficiency of materials.